The ‘Banana Incident’ – Worst. Opener. Ever.

Do you remember Bert and Ernie from Sesame Street? They were my favorite Muppets growing up. Ernie was always annoying Bert for one reason or another. In one episode, Ernie was holding a banana up to his ear for no apparent reason.

Annoyed, Bert asked him, “Ernie, why in the world do you have a banana in your ear?!” 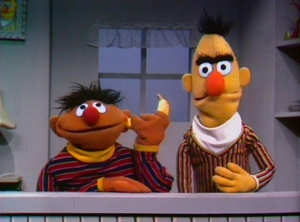 To which Ernie kept saying, “Sorry, Bert, I can’t hear what you’re saying! I’ve got this banana in my ear.”

This repeated again and again, with Burt becoming increasingly frustrated and angry at Ernie. That skit always cracked me up.

A couple years ago, that story was the first thing I thought of when I saw a gorgeous woman sitting on a park bench, eating her banana.

So, intending to tell her the story, the first brilliant thing that came out of my mouth when I went up to her was,

My mind suddenly had a dialogue with my mouth:

I could feel my body completely tightening up.

Her reluctant eyes slowly turned from the book she was reading to look up at me with poorly-concealed contempt.

Then she rolled her eyes right back to their starting position on her book.

I could feel her seal me out like the airlock sound every door seems to make in those Star Trek movies. Shhhlock!

Boldly, I plowed through, fumbling through my Sesame Street story. I got a small smile and hung in there, but my fate was pretty much sealed… it was like trying to fight against the sunset. It was going dark and cold… fast.

She finally requested to be left alone on her lunch break, so I bid her goodbye and left.

However, I Had A Huge Epiphany…

After reflecting on this interaction, I realized that what killed it had NOTHING TO DO WITH WHAT I SAID, even though “Is that a banana?” wasn’t exactly the most perceptive opener.

What Killed it was the fact that I was a “No” to how the interaction played out. My mind decided that I had “said the wrong thing,” that I had “screwed up.”

Now, if I had been a complete “Yes” to whatever happened in the interaction, embracing her response and taking nothing personally, my creativity would have come out. I could have found all kinds of fun ways to play with her, even though my first remark fell flat.

In fact, after the interaction, all the great responses I could have had to her eye rolling came rushing in:

“What? A guy’s gotta be some kind of a genius at fruit recognition to talk to you?”

Or, pretended to be a tourist, “Sorry, me still learning English. Where is Golden Gate Bridge?”

But check this out:

When you learn how to Be A “Yes,” all the clever things that you think of after the fact become accessible to you right there in the moment. 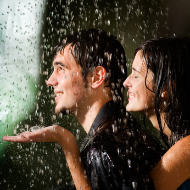 When you learn how to Be A “Yes,” all the clever things that you think of after the fact become accessible to you right there in the moment.

And as I’ve learned from Decker, it would not have even mattered WHAT I said.

The main thing is that if I was a “Yes” to the interaction my creativity and spontaneity would have been fully accessible to me through the whole experience.

Before Your Next Interaction With A Woman…

Take a moment to check:

Can I fully embrace whatever happens?

In other words, can I be okay with HOWEVER this interaction plays out?

If she gets cold with me, or shuts me out, or worst case scenario, screams at me, throws a drink in my face, whatever…can I be a “yes” to that? 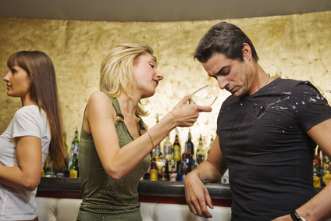 It doesn’t mean you just “put up” with disrespectful or bitchy behavior. It simply means you’re not LOSING COMPOSURE as you set a boundary.

This is what we call “Appreciation” – the second level of our AMP Holarchy Inner Game Training model — fully appreciating, embracing, and accepting the moment, as it is, without trying to change or fix it.

We go into more detail, including specific practices about how YOU can save any interaction from dying an early death, and create MORE attraction and connection, naturally in our Inner Game Training Program — and you can get a FREE trial and access to some of our latest & deepest AMP distinctions…(just click the link below…)

And when you discover and implement our 3-step process for straightening out all your “Inner Game” challenges, it will blow the doors off of what you may have known was possible with women.

You can get it here, now: